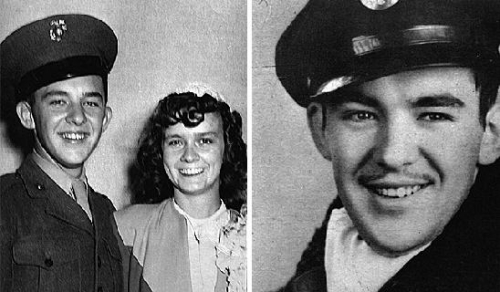 I was not able to attend the services of Airman Second Class Conrad Sprague but I am glad Airman Jimenez did a story.

A ceremonial guardsman wearing white gloves raises his hand to render a salute as a white sedan pulls up to the curb. He proceeds to the vehicle where he respectfully retrieves an urn containing the remains of a fellow comrade. The urn holds the remains of Airman Second Class Conrad Sprague that were presented to his family during an honors ceremony May 10 at Tahoma National Cemetery in Kent, Washington.

Sprague was one of 11 crewmembers and 41 passengers on board a C-124 Globemaster II that crashed into Mount Gannet, Alaska while en route to Elmendorf Air Force Base, Alaska, from McChord AFB, Wash., on Nov. 22, 1952.

For the last 63 years Sprague has been missing in action until earlier this year when his remains were identified by the Armed Forces Medical Examiner at Dover AFB, Delaware.

“The last thing I remember is seeing him the day he got on the plane, “said Denis Sprague, surviving son of Airman 2nd Class Conrad Sprague and Army sergeant first class retiree. “For all this time he has been MIA — we never got an official ceremony.”

Since the crash of the aircraft no service members from the flight were recovered until after June of 2012 when an Alaska National Guard UH-60 Black Hawk crew spotted aircraft wreckage and debris while conducting a training mission over Colony Glacier, immediately west of Mount Gannett.

Since being discovered, recovery operations have taken place every summer resulting in the finding of the remains of 17 Airmen including Sprague.

“We heard the news in 2013 and were asked to provide DNA samples,” said Denis. “I got notified six months ago that they had uncovered three pieces of my father’s remains.”

“All I’ve ever had to hold unto was a piece of the plane that was recovered,” said Denis. “That’s as close as I’ve been able to come to it.”

Because Sprague died while serving he was given a full military honors ceremony. The ceremony included a firing party, a flag folding ceremony, presenting of the colors and the playing of Taps.

“The reason this was special is because we got to bring a fellow Airman home,” said Tech. Sgt. Justin Nolan, McChord Field Honor Guard NCO in charge. “It shows the Air Force does care. After decades missing he was brought back — to me that’s special.”

“This was something he deserved — it’s a right he earned for his service,” said Senior Airman Matthew Feigum, McChord Field Honor Guard ceremonial guardsmen. “I hope this provided them a little more closure than they had before.”

For Denis the ceremony was a long anticipated event that would provide the conclusion to that point in his family’s history.

“The closure is the most important thing,” said Denis. “I wanted some closure on this part of my life that was left wide open for so long. I had some recollection of what happened but was never able to say goodbye.”

A Washington native, Airman Second Class Conrad Sprague was survived by his wife Dorothy Jean and his three children Denis, Christopher and Constance. Sprague is no stranger to the community and is related to one of the City of Tacoma’s founders and Medal of Honor recipient Brig. General John Sprague.

To Sprague’s family he died a hero and deserved the honor he received.

“He was a true hero because he died doing what he thought was right — just like we all are willing to do who put on the uniform.” said Denis.
~Story by by Senior Airman Jacob Jimenez , 62nd Airlift Wing Public Affairs