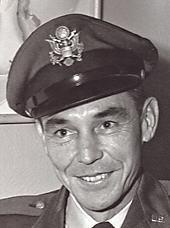 Captain, Kenneth James Duvall, 37 at the time, was a native of San Francisco, and a 1934 graduate of Vallejo (CA) High School. He resided with his aunt, Sadie Lou, in Litchfield while attending Arizona State College with his brothers, Claude and Allan. Ken graduated with a degree in accounting in 1939. He entered the infantry in 1941, shortly after the attack on Pearl Harbor. He transferred to the Air Force and attended Officers Candidate School. He distinguished himself as a B17 bomber pilot, completing his 25th mission one week before the Normandy invasion. He returned to the US and flew transport missions between Florida and Cuba.